It's hard to believe that Adeline is four months old!  It's so exciting to watch her learn new things and explore the world around her, but at the same time I keep telling her to slow down.  She may be a tiny little thing, but she is getting so big!  Adeline has finally hit double digits - at her appointment yesterday she was 10 lb 4 oz!  That would put her in the 1st percentile on the growth chart.  I was just excited that she was actually on the chart because I was worried she wouldn't be.  Some days I worry about her weight, but her pediatrician reassured me that she's very healthy and not to worry - she's just petite :)

Here are some things Adeline's up to at 4 months...
- she loves sitting in her bumbo and playing with toys
- everything goes straight to her mouth
- she has given us a few giggles, but she's pretty stingy on them compared to how readily she gives out smiles
- she'll roll from her tummy to back
- she'll roll to her side when trying to reach a toy she wants
- stares at Cooper all the time (I think they're both trying to figure out what the other one is)
- is very observant
- "talks" to us and gets upset if we don't understand her
- started going to story time at the library this week and so far I think she likes it

She's the best thing to happen to us!

And of course, lots of pictures... 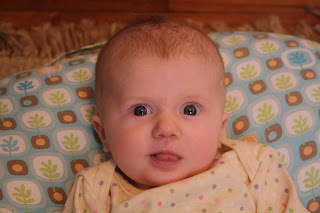 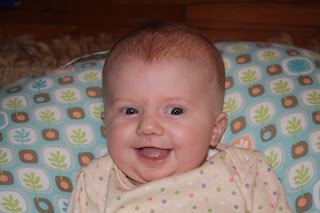 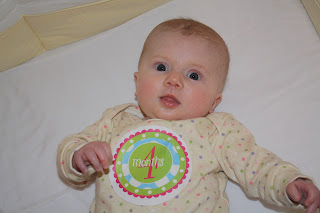