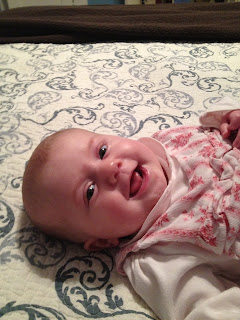 Like all moms I found myself putting away Adeline's clothes that are too small for her all the while reminiscing over the days when she wore them.  Now I'm a math person so I clearly know that my child is only four months old so "those days" really weren't that long ago.  But she's had a jam-packed four months and has come so far.  Being the petite thing that she is (by the way, weight check today and she's up 9 ounces in 11 days!), I thought I'd just have a few things to pack away, especially since we didn't have many newborn things for her since she spent a month in the hospital.  Oh but I was wrong.  I filled an entire box of clothes that are too small for her - maybe it's a girl thing and having too many clothes??  As I packed away each outfit, I thought of the first time she wore many of her clothes.  I was most sentimental over the clothes she first wore in the hospital, especially since she didn't wear any clothes for weeks.  It was such a big deal for me to finally be able to put her in clothes.  To me that was a sign that we were close to going home.  Looking at those tiny newborn clothes, I couldn't believe that she ever actually fit into them.  And now that she's moving into 6 month clothes, it seems like just yesterday that I was looking at them thinking she'd never grow into them.  I'm sure this is one of countless mommy sentimental moments.

I know every mother says it, but I still can't believe she's growing so quickly and becoming her own little person.  Just today Andrew peeked in on her while she was napping and made that comment that she's getting so big.  Adeline has such a fun personality and is a very easy baby (minus the rough nights we've had lately).  In just the past week she is grabbing EVERYTHING - my glass, hair, phone, any toy in front of her, you name it.  Quite a few times she's managed to smack herself in the face with a toy, but I'm not so sure that's something to brag about :)  She's become a professional bubble blower and is making all kinds of new noises.  And just like her mama, she's nosey and doesn't want to miss a thing.  Before I know it, she's going to be chasing Cooper around the house!

And for the record, I hate reflux, but that's all I need to say about that. 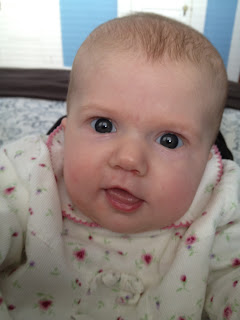