Every sane person thinks it's a smart idea to move with a seven month old, right?? 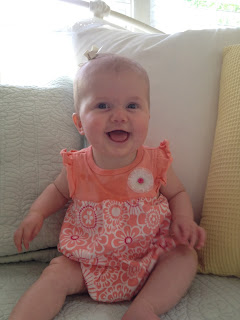 The past few weeks have been just slightly chaotic...I refer to our moving process as speed moving.  We went from having no boxes packed to all boxes packed and ready to move in a matter of a few days.  I'm not one to usually procrastinate so don't ask me why I waited so long to pack boxes but somehow we managed to make it all work.  It has helped that our old house doesn't close for a few more weeks so we've had plenty of little trips back and forth to pick up piddly stuff.  Not to mention that Andrew has had to travel several times for work.

The best part of all of this move has been Adeline.  She has been a little trooper!  She's found a new toy in packing paper and has been happy and babbling away while there's been chaos all around her.  Thankfully we've had the arsenal of grandparents who have come in to help - thank you so much!  She's had quality time with all of them, and they've been the reinforcements we've needed when as Andrew says we start spinning in circles and don't know what to do next.

We love our new house, but we do miss our old house!  It was our first home and where we brought Adeline home (after a long 8 weeks in Charleston).  We especially miss our neighbors, but we're not far and Adeline will always be a true Woman of Etiwan!

Cooper spent some time with her grandparents during the move, where she was spoiled of course.  She's doing pretty well adjusting but is still a little neurotic at times.  She does love being able to look out the french doors into the backyard.

We're at the point now where everything necessary is put away and we're functioning.  Now it's time to decorate which to me is by far the hardest part.  I tend to end up staring at walls and built-ins, not knowing what to do.  Yesterday I started walking around hanging pictures on hooks that are already there.  It's a start, right?  As everyone has told me, I'll never feel finished.

On that note, I better get back to unpacking and attempting to decorate!  More pictures to come later :) Oh and if anyone needs to borrow a pitcher, I discovered in the move that I have 8, all colors and sizes!
Posted by Christin at 9:44 AM