Today marks one year since we found out about Adeline's special heart.  I feel like we've come full circle.  This time last year we were in a complete stage of uncertainty, and now we are fully enjoying life with an almost eight month old and loving every minute of it.  A year ago I wanted to freeze time because I knew Adeline was safe inside of me, and now I want to freeze time because she is growing up so quickly!  No matter how many times you hear the phrase "the days are long but the years fly by," you can't prepare yourself for the true meaning of it until you are actually living it.


April 29 will always be a special day for us.  It's a day that I both like to look back on and yet also not think about. When I stopped to think about it this morning, every detail of that day is so vivid to me...the outfit I wore (and never wore again), my OB walking into the ultrasound room and putting her hand on my leg (never a good sign), Andrew calling school saying I wasn't coming back in, trying to eat a late lunch at Andy's, coming home to sit in her room praying we'd actually bring her home to it...

That night I rocked and rocked in her unfinished room pleading to God that He would heal her heart so we would be able to one day bring her home.  By the end of the night I did feel confident that we would bring her home but that fear was always there.  Being one that likes to be in control, I had to give over all control.  Having the faith and trusting wasn't always easy that's for sure.  And in such an amazing way did God heal her heart.

If I could have known that April 29 what our life would look like in a year, I'm not sure I would have believed it.  Adeline is so full of joy, and even though her heart isn't "normal," I do know that it's one of the biggest ones out there for such a petite little thing.  It seems that everywhere we go people stop to comment about her and she smiles so big back at them (I think it might be a baby thing too).  I'm listening to her now as she wakes up from a nap, and she's squealing and talking away.  What about, I'm not quite sure, but what I do know is that she's happy, and we couldn't be any happier.  I'm so thankful that God gave us a special heart baby and chose Adeline for us. 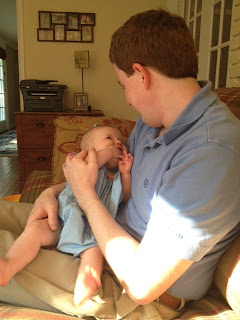 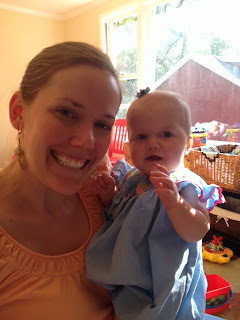 I've got lots to update on and promise to do so later this week!  She's up, and we have one more ceiling fan to hang.  The new house is slowly coming together but only so much can be accomplished during nap time!