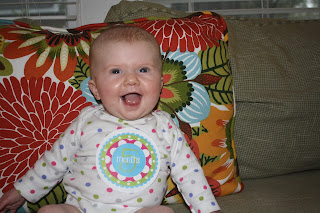 So I'm obviously a little late in posting this, but Adeline was 5 months on February 3!  I think this is the longest stretch we've had of no doctor visits which is a great thing but also hard for me to adjust to not seeing either her pediatrician or cardiologist.  I like to see them and have them reassure me that she's doing great.  But then I have to keep reminding myself that the further appointments are spaced out, the better.  It's just like when I had to wean myself off of her monitors in the hospital.  By my best guesses in my attempts to weigh Adeline - you know the stand on the scale with baby, then stand on the scale without baby and subtract - she's around 12 pounds, yay!!  She's a perfect little peanut :)

When she turned 5 months we decided to go ahead and try her on oatmeal cereal.  To say she loves it is an understatement.  She was a little skeptical the first few bites, and then she began to dive in.  It's hilarious to watch her eat because her arms and legs start flying, and she shakes her head back and forth as she literally nose dives towards the spoon.  It can be tricky getting the spoon into her mouth because she'll nose dive, and then the spoon is hitting her nose instead of her mouth.  I think we've finally reached the point where the ratio of food in her mouth versus food on the bib favors her mouth.  We're waiting to try other food when she turns 6 months old.  Cooper even enjoys it when Adeline eats (I know she'll enjoy it much more when Adeline drops food on the floor...)  Cooper is a very social eater and only eats when we eat - she will now eat whenever Adeline is eating cereal.

I know I'm bias, but I think Adeline is the happiest baby!  She smiles all the time (complete with her tongue sticking out) but can be a little shy when around a larger crowd.  When we're at the library for story time she tends to just observe and watch the other babies, taking everything in.  I think she's trying to figure out how it is that they crawl and move around on their own.  She's into squealing and babbling like crazy.  We'll hear her in the middle of the night giggling to herself...not really sure what she finds so amusing in the middle of the night, but it's still cute to listen to her.  Her once so great sleeping habits aren't so great anymore, but hopefully we'll return to those nights sometime soon.  Can't believe in a few weeks she'll be 6 months old! 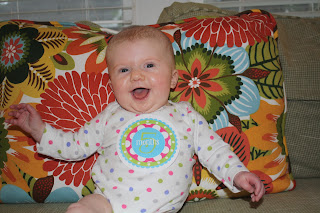 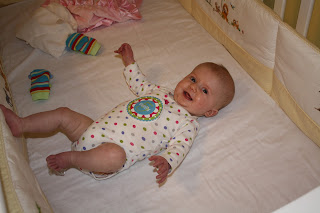 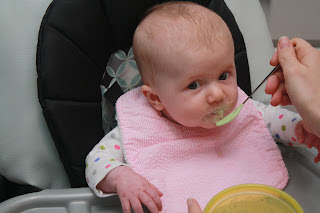 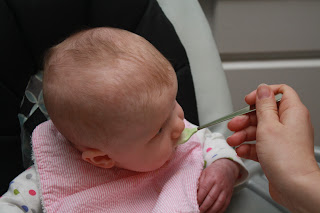