The Week of Doctors Appointments

I'm sure that Adeline is happy to know her week of doctors appointments is over!  On Tuesday, we drove to Charleston for her repeat swallow study and to see ENT.  As we made the drive into Charleston, parked in the parking garage, and walked in the hospital, I felt like I had made that walk the day before.  But this time was different as I pushed Adeline in her stroller knowing that we would be leaving that afternoon.  Even the soap in the bathroom brought back so many memories.  It's crazy how your senses kick in with memories.  As we walked in, we ran into the cardiac PA on the step-down unit.  It was good to talk to her and for her to see Adeline.

Adeline passed her swallow study with flying colors so she is now able to have thin liquids.  This means no more rice cereal in her bottles!  She is able to have regular breastmilk, and I'm allowed to breastfeed but that's a story for another day...let's just say lots of little baby steps in that effort.  Instead of 20-30 minutes, feedings now only take about 10.

Between appointments we enjoyed a nice lunch, and even though Andrew wanted to eat in the cafeteria, I convinced him to eat at a restaurant across the street :)  Much of life at MUSC appears the same except that the large tree in the horseshoe is now decorated for Christmas.

ENT rescoped Adeline to check on her left vocal chord paralysis.  She screamed of course proving to him that she's much louder than she previously was :)  He wasn't able to see her left vocal chord moving, but he was able to see the muscle that moves the vocal chord moving so that was very encouraging.  Clinically, all the doctors are concerned with is her ability to swallow thin liquids.  He said she's compensating well and is probably 50% of the way recovered.  Adeline does not have to see ENT again unless something comes up, yay!  He did mention that she might not have that great of pitch distinction, but it's not like we expected her to have much musical talent when you consider her genes.

Yesterday, Adeline saw her cardiologist, and he said she looks great!  She won't have to see him again for 3 months!  After that, she had to have a repeat hearing screening because she's considered at-risk because of spending weeks in the hospital and being on heart-lung bypass during surgery.  She passed the screening and will have screenings about every six months for a few years.  If she's like me, she'll have great ears though and hear everything.

Hopefully no more doctors appointments for Adeline in 2011 and no more visits to MUSC even though we are very thankful for it.  She's learned to be quite leery of any doctors office.  Now it's time to finally get the house all decorated for Christmas and start new holiday traditions for little Adeline. 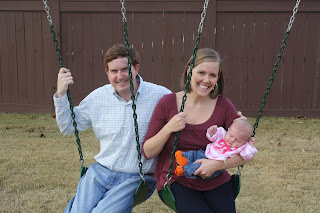